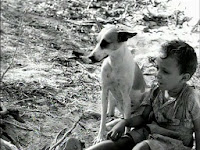 The Italian neorealism movement translated to a Brazilian setting.  Oh Lord, help us all.

Every Brazilian movie that I have seen from The List has mostly been about how much it sucks to be Brazilian.  This film is no exception as it follows the lives of a poor family trying to find work.  They eventually do find work but everything ends up going to hell anyway.  Oh yeah and the director tries to  exploit our sentimental side in the cheapest way possible (hint: the dog did not receive top billing).

I guess my biggest complaint about this movie is that, sadly, the story of a poor family struggling is very unoriginal.  The List, at least, has shown us this plot around fifteen times.  Grapes of Wrath and Pather Panchali come to mind (though at least the former had good acting and the latter had beautiful cinematography).  I suppose I should just be looking at this movie individually, but it was hard not to be bored when I basically knew everything that was going to happen during the opening credits.

Have I been too harsh lately?  I might try to relax a bit more during the next film.  But until then...

Based on a story by Graciliano Ramos.
Posted by Amanda at 1:09 PM