The Haunting
1963
Directed by Robert Wise 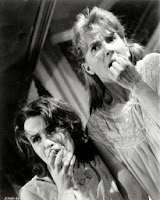 I want to start by saying that this film did not scare me even a little bit.  The writer for this entry of The Book advised not watching it alone.  I am sorry, SJS, but you kind of sound like a wimp.  Although I suppose we all have films that scare the living daylights out of us but other people are completely immune to (this is particularly embarrassing when everyone leaves a friend's house to go to the cars after watching The Blair Witch Project but you won't leave the house without an armed escort).

However, I think a horror film can still be enjoyable even if it is not scary.  This film kind of follows the usual formula that we have now for found footage films, although, of course, this movie invented the cliche.  Dr. Markway wants to investigate the haunted Hill House and brings a lesbian psychic, the heir to the house, and, for some reason, a girl who looks like she would wet herself if she talked to a stranger.  Strange stuff goes down and Meek McGaspy begins to lose her shit.

We have had quite a few films that hail from Dullsville lately so I was really grateful to watch such an entertaining movie that had great pacing.  Now, the acting wasn't great; the exception being Russ Tamblyn, who I love.  But I still think it is worth a watch for anyone who loves horror films.  If you don't, better skip it.

Robert Wise has said that this film is a tribute to his mentor Val Lewton.