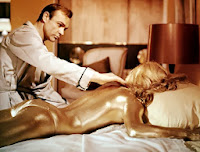 I knew the day would come on this blog where I would have to confess to loving the chauvinistic, often sexist James Bond movies.  I just didn't think it would come so soon.  I have actually seen every one of these movies and have read all the books. I still maintain that George Lazenby was the best Bond but that's a topic for another time.

The plots of these movies are never important.  I say that to make myself feel better because I can never follow any of the plots.  Basically, Bond sleeps with women, both straight and gay, while saving the world from villains and making bad puns.

Why do I have so much fun with these movies?  They are extremely offensive to both women and Asians.  I remember one film where Bond had to dress as Japanese guy and the transformation was not..um... PC.  I suppose I should just base my review on this one film but it is hard for them not to all blur together.

I am not a huge action movie fan; I find them all to be exactly the same.  But this film is the inventor of the cliches and does them better than any movie since.  I especially appreciated this movie in the context of the list, since we have so many dull, but "artsy" films.  This is just a fun film that will make you laugh and keep you interested.  One of my many, many guilty pleasures.

Honor Blackman is the oldest woman to have played a Bond girl to date.