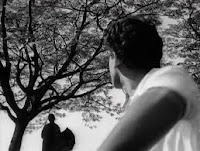 Yikes, if things don't turn around soon I am going to get a reputation as a film basher and intellectuals everywhere will be charging down my door.  However, I can't pretend to like a film that I did not, merely to please my commentators and this film was boring as hell.

To be fair, I am not a huge fan of Indian cinema.  I find that films from India tend to be a little too melodramatic for my taste.  Additionally, the music that is inserted tends to annoy me and I feel like it really has no place in the film.  But let's get to the movie at hand.

This is the story of Neeta, a good, self sacrificing person who is constantly exploited by people around her, including her own family.  Well, they certainly miss the water once the well dries up.

Like I said, these kind of films are so over the top, that even the best actors seem a bit silly when they say their lines.  For instance, at one point in the film Neeta's father says "I accuse…", pauses dramatically, and then says "no one".  Really?  I just did not find the dialogue or the behavior of the characters relatable in any way.

Still, there are some pretty shots and I don't regret watching the film.  Certainly not a favorite, though.

This seems to be quite an unknown film, so there is very little trivia on the web.