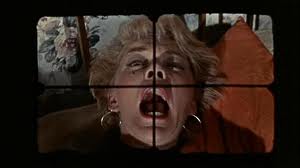 I am a huge fan of horror films and they would probably rank #1 in my favorite genre list.  This film is particularly important because it was the first horror film to show murders through the killer's perspective.  This will be important fact to remember, because it is a question Ghostface asks in one of the Scream movies.

A creepy guy longs to capture fear on camera.  Using creepy guy logic, he decides the best way to do this is to kill women and film their dying screams on camera.

I, however, had a different reaction.  While I can't see watching this film again, I certainly appreciate its value.  It was deeply unsettling to see the watch the murders from the killer's perspective.  And although the concept may have lost its freshness by now, there is no denying what this film did for the horror genre.

Additionally, the acting was great; Karlheinz Bohm was creepy as hell and Moira Shearer is always a treat.  An essential watch for any horror fan.

Destroyed the career of Michael Powell because of the scandal the movie aroused.