Splendor in the Grass
1961
Directed by Elia Kazan 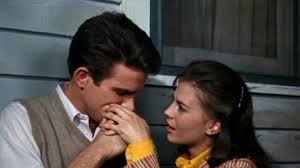 This was definitely a nice surprise.  I had never heard of Splendor in the Grass before and based on the title, I was picturing some artsy European film, and honestly, I wasn't in the mood.  However, this was a very relatable film that reminded me heavily of my own high school experience (although no one was as hot as Warren Beatty and everyone didn't have perfect skin).

Deanie and Bud are going steady but Bud wants to take their physical relationship to, um, move to the next level.  On the one hand, Deanie would be considered a slut if she slept with him.  On the other hand, she would be considered a prude and might lose Bud if she doesn't put out.  Anyway, Deanie starts to lose it a bit, in an over the top, teenage girl fashion. Or maybe not so typical after all.

Well, it was certainly interesting to see a film that addressed real issues with teens that are still relevant today.  I mean, we had Rebel Without a Cause before, but I could never connect to our rebel because, um, he had no cause.  But like I said, this film actually dealt with problems that teenage girls face.  Of course, I never dated in high school so I wasn't exactly turning away the fellows.

And surprisingly, Natalie Wood is fantastic in this film.  I had written her off as a somewhat wooden actor but I am forced to revise my old opinion.  One of the many things Past Amanda was wrong about.

So an interesting film that is relatable and well acted.  Worth a watch.