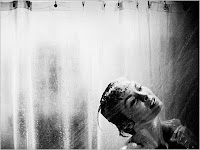 This is by far the scariest film I have ever seen in my life.  I am judging this not by how I feel about it now (though I am still wary of shower curtains) but how I felt the first time I had seen it. I remember watching it for the first time with my sister and consequently sleeping in her room during the night.  I woke up screaming that night and the following morning I insisted on a buddy system being implemented in our house.

Now considering the fact that most people who watch this film aren't fifteen year old girls who have never seen a scary movie before like I was, you might not have such a visceral reaction.  However, I think the score, the performances, and the creepy way the killer prowls are enough to make anyone lock their bathroom door before taking a shower.

Marion Crane takes off with her boss's money with plans to run away with her boyfriend.  She decides to stop at the Bates Motel due to the heavy rain.  One thing leads to another and long story short, my brother is playing the Psycho theme outside the bathroom while I am taking a shower and I am crying.

All right, so obviously I found this movie terrifying.  However, it is also one of my favorite movies.  The fact that Alfred Hitchcock was able to scare people with a mere silhouette is extremely impressive. The twist is shocking and surprisingly still original.  One of the greatest horror films of all time.

Hitchcock bought as many copies of the novel as he could in an attempt to keep the ending secret.

Before Marion steals the money her purse and bra are white.  However, after she takes the cash, her purse and underwear are black.  This was an attempt by Alfred Hitchcock to show Marion's transition from good to evil.

First movie in America to show a toilet flush.

Janet Leigh took baths for the rest of her life after watching the shower scene.