The Apartment
1960
Directed by Billy Wilder 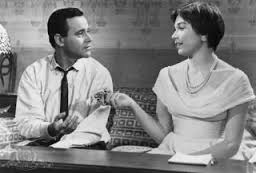 This is a comedy that is pretty much universally liked by everyone; you would be hard pressed to find a bad review of the film.  Today, I will stick with the public opinion (mostly because I am afraid of nasty comments) and gush about the movie.

I feel kind of weird labeling this film as a comedy.  There are some funny parts but frankly, the movie is kind of depressing.  This is the story of C.C. Baxter who, in an attempt to help his career, lets the executives of the company use his apartment for their extramarital affairs.  He has a change of heart, however, when he realizes that one of the girls his boss takes to his apartment is Fran, the woman he loves.

Like I said, it is hard to call this film a comedy.  I almost feel like the movie is pretending to be a comedy in order to convey its message about the corruption of the rich and powerful in a light hearted manner.  I mean, attempted suicide doesn't exactly have me slapping my knees.  I would consider it more of a drama with some laughs along the way.

Anyway, here comes the previously promised gushing.  What an offbeat and original movie.  Even fifty years later, the movie still seemed fresh and unpredictable.  I have always loved films about characters struggling to overcome the stifling ordinariness of their lives and Jack Lemmon plays the role perfectly.

A great film and you don't have to take my word for it; you can take everyone else's!

The film's famous last line, "Shut up and deal", was thought of on set at the last minute.