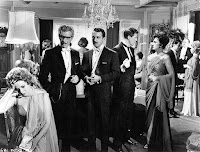 1100 movies, 1100 reviews! I've given many unprompted speeches about my milestones over the years, but this feels like a pretty big one. It's been a blast, and thank you to every person who has reached out to me, even when it's just to tell me what an asshole I am. I get a kick out of every comment. Speaking of comments, an Anonymous commentator recently suggested I watch The Exterminating Angel, as it is the ultimate quarantine movie. And boy, was it.

Senor Edmundo Nobile and his wife Lucia host a dinner party at their lavish mansion. A mysterious power prevents the guests from leaving the party, and, as the days pass, they grow more and more desperate.

I love stories that answer simple what if questions; what if nobody could leave a dinner party? The symbolism here was fascinating. I thought it was brilliant that all the servants (for an unknown reason) left their posts right before disaster struck. It was like, once the bourgeoisie had nobody left to step on, they imploded. Putting aside class issues that were so obviously prevalent in this film, the movie also managed to tap into my own social anxiety fears (what if I couldn't leave somebody's house? What if they couldn't leave my house??).  A very eerie and unique film.

This is probably the best Bunuel movie I have seen, and it wasn't even in my edition. Instead, they included The Young One? What gives?

Oh, and the fact that Buffy the Vampire Slayer paid homage to this movie is just icing on the cake.

Bunuel believes that the film was a failure and wishes it could have been shot in Paris, and included cannibalism. Artists must be saved from themselves.

Was banned in Russia, because why not.