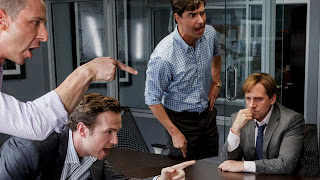 I vaguely recalled watching part of this on a bad date, but I think I was spending my time plotting my escape and consequently did not pay much attention the first go-round. This time, I am more focused, and more familiar with Adam McKay, who apparently is dedicating his life to telling the stories of white privileged pricks.

In short (HA! Blame the quarantimes, please), this movie explains how the financial crisis of 2007-2008 was caused by the housing bubble. Knowing that most Americans couldn't care less about the economy, McKay is desperate to hold onto our interest as he walks us through this thing. This entails having celebrities explain certain key concepts, like having Margot Robbie breaking down jargon while taking a bubble bath. I think it takes more skill to weave pertinent information into the narrative, rather than having some sort of star-studded glossary interrupting the story every so often, but that's McKay for you.

This movie obviously has an amazing cast, with Steve Carrell in particular standing out. How thrilled was Christian Bale to play somebody with a glass eye? It's Spencer Tracy at Bad Day at Black Rock all over again. I wish they had done more with Marisa Tomei, but can understand why she was regulated to the sidelines.

So great actors and a great script; this movie is highly quotable. Still, this is only slightly less subtle than a Michael Moore documentary. He's not my favorite director, but if he keeps casting Steve Carrell, I'll be happy and quiet (or at least happy).

Lola FX did the special effects for Bale's glass eye, making it more noticeable than it would be in real life.

The real Michael Burry makes a cameo as a Scion employee.

First Adam McKay movie not to feature Will Ferrell.
Posted by Amanda at 6:57 AM