Inside Llewyn Davis
2013
Directed by Ethan and Joel Coen 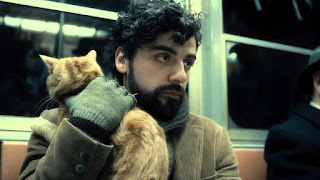 Friday was my friend's birthday so I decided to honor him by watching his favorite movie for this blog (you know, instead of giving him a present or something). As I watched, I was shocked that my friend had taken to this movie so much. My friend has a very specific idea of what a man should be, and this lead character wasn't it. So I checked with him and it turns out I got it wrong, his favorite movie is The Life Aquatic with Steve Zissou. I guess I will have to accept my friendship award over Skype this year.

In 1961, Llewyn Davis is a struggling folk singer trying to make it in Greenwich Village. He gets by by sleeping on his friends' couches. Among these friends are the Jean and Jim Berkey. Jim is oblivious to the tension between Jean and Llewyn, and lets Llewyn record a truly awful novelty song with him. Why does Justin Timberlake keep popping up on this List?

The struggling artist story is one that has been told many times, but the Coen brothers are able to make it feel somewhat fresh here. Or, at least, fresher than the other entries on the List, like A Star is Born. Llewyn was such an unlikable character that it was difficult to watch at moments, but he was redeemed through his music.

The music in this film is predictably great, with the exception of "Please Mr. Kennedy," but that was intentional. There is extraordinary talent here, but I do feel like Carey Mulligan was kind of shunted to the side.

I did finding myself wondering what the point of the whole thing was by the end, but I am pretty sure Llewyn was pondering the same question. Not my favorite Coen Brothers by any means, but still enjoyable.

The cat story line was thrown in because the Coen brothers were concerned there wasn't a plot.

Suzanne Vega said of the film, "I feel they took a vibrant, crackling, competitive, romantic, communal, crazy, drunken, brawling scene and crumpled it into a slow brown sad movie."
Posted by Amanda at 9:14 AM