An Education
2009
Directed by Lone Scherfig 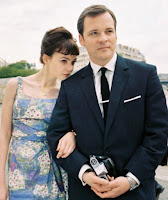 Why did it take me so long to watch this movie? It has everything I could possibly want: female director, coming of age story, discussions of literature, and a handsome man in a suit. Throw in Alfred Molina and this could very well be the perfect movie. For me, at least.

It's London in the 60s, and Jenny is a young woman who has everything going for her. She is the brightest in her school, and plans on attending Oxford. One day on her way home from a youth orchestra rehearsal, she meets David, a charming older man who shows her there is more to life than studying latin on your father's orders.

I feel like not a lot of female coming of age stories deal with the displaced rage that comes with adolescence. I guess because anger is typically viewed as a male emotion. Jenny is angry at the adults trying to help her, and fascinated by the adults who are not. Maybe not the most unique story, but it was very relatable.

The cast of this film is also amazing. I think Peter Sarsgaard in particular did a good job of portraying something dark with a shiny veneer. Must run in the family.

Carey Mulligan was 22 year olds when this was filmed, despite playing a 16 year old.
Posted by Amanda at 6:20 AM