The Look of Silence
2014
Directed by Joshua Oppenheimer 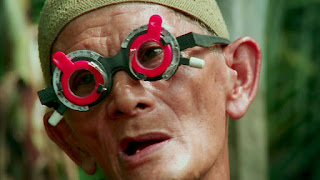 Well, I made it about 13 minutes into this documentary before crying. I think that is fairly laudable. I am usually a stone cold movie watcher (I didn't even cry at Coco! Coco!) but of course, this is all too real.

About two years ago, I reviewed The Act of Killing, the companion piece of this film. As a quick recap, it wrecked me and I've been slowly picking up the pieces of my soul ever since. I decided to ruin my life again in the midst of the pandemic, because why not? This time around, a middle aged Indonesian man (Adi) interviews former death squad members under the pretext of fitting them with glasses. Oh yeah, and to make it extra devastating, his own brother was killed by the same squad members during the communist purge.

So once again, we have to watch these old men giggle and reenact the murders they perpetuated as we fruitlessly search for signs of remorse. Oddly enough, Adi seemed to find those signs of guilt, or maybe he just needed to believe they were sorry for his own peace of mind. Either way, it is incredibly powerful to have a man try to convince you his brother's killers aren't total monsters.

I just read a disaster of a novel, Hadrian the Seventh, for my book blog. It made me wonder if art is ever capable of correcting things. I would be curious to hear my readers' opinions on that. Maybe with art, it's not about fixing things, it's about healing.

RATING: Seems icky to rate this one

Adi and his family moved to the other side of the country for their own safety.
Posted by Amanda at 8:05 AM