1098. The Girl with the Dragon Tattoo

The Girl with the Dragon Tattoo
2011
Directed by David Fincher 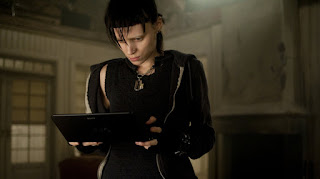 I'll fess up right now, I haven't the read this novel. In some instances, I think that it is unacceptable behavior (for a full list of unacceptable instances, please privately inquire). Hopefully, I will be forgiven among my Goodreads brethren.

Mikael Blomkvist is a disgraced journalist living in Stockholm (I guess Daniel Craig is supposed to be Swedish but the accent situation is really out of control in this movie). A libel suit was brought against him by Hans-Erik Wennerstrom, who is a shady businessman who was certainly guilty of what Mikael said, but, unfortunately, Mikael wasn't able to prove it. Henrik Vanger enlists Lisbeth Salander, a brilliant hacker, to perform an extensive background check on Mikael. Lisbeth...well, Lisbeth has her own stuff going on. But Henrik asks Mikael to investigate the 40-year-old disappearance of his grandniece, Harriet.

I was looking for something to cheer me up after last week's death squad documentary and I thought a shirtless Daniel Craig might do the trick. I guess this movie satisfies the morbid curiosity we all seem to have about serial killers and brutal murders. I maybe have a little less curiosity than some, and would much rather focus my attentions elsewhere (see above, regarding a shirtless Daniel Craig) than fixate on the sadism of some of these characters.

But it's still a gritty, compelling story that has style; it's David Fincher, after all. Maybe not groundbreaking, but an entertaining movie.

All of Rooney Mara's piercings were real.

Scarlett Johansson was considered for the lead role, but she was deemed "too sexy." Even rejection is nice when you're hot.

Daniel Craig gained weight for the role to remind us all that he was not James Bond, and just a normal journalist. Yep, he's just an average schlub like the rest of us... I guess he wasn't considered "too hot" to play an average guy. Hmmm...
Posted by Amanda at 9:31 AM