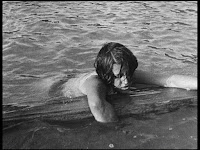 I like seeing examples of early cinema from around the globe, even if they don't always contain the most compelling narratives. This is an early Brazilian movie that the Listmakers added to a later edition, and on the whole, I think the List is better for it.

A man and two women are lost at sea in a rowboat. Their pasts are given to us through flashbacks. Warning, these characters will stare at you for uncomfortable lengths of time.

I love that the director had a literary background; I think that influenced his approach to storytelling in interesting ways, with the film's unique structure and characterization. You can also clearly see the influence of German expressionism in his work.

That being said, this is still a two hour silent movie not in any hurry to make a point, so I won't pretend it is as interesting as other quarantine movies you might be binging right now. Let me know what you are watching in the comments!

Dubbed the Un Chien Andalou of Latino cinema.
Posted by Amanda at 8:30 AM