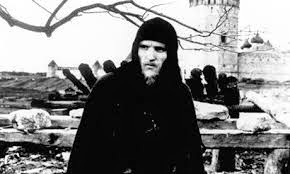 I have been trying to get through this film for the past week and a half and lord, have I struggled.  I am also currently reading Marcel Proust's Remembrance of Things Past.  I am going to have to seriously binge on reality television to ensure that my brain is still mush.

The version I watched of this film was 205 minutes so I am not going to go into great detail about the plot.  This is a handy excuse, since I wasn't paying a lot of attention.  Your movie reviewer, ladies and gentlemen.

What I do know is that this movie is overrun with glaringly obvious metaphors.  For example, the film starts with a man preparing for a hot air balloon ride.  As he rises into the air, an angry mob, frightened by the spectacle, try to stop him.  On the other hand, the man is completely in awe of the views afforded to him with this device...until he crashes.  Let's get some English professors in here to figure out what that means.

Just plain dull and heaven knows we have more than our share of those.

A horse from a local slaughterhouse was shot in the head for the scene when the horse falls down the stairs.  Charming.