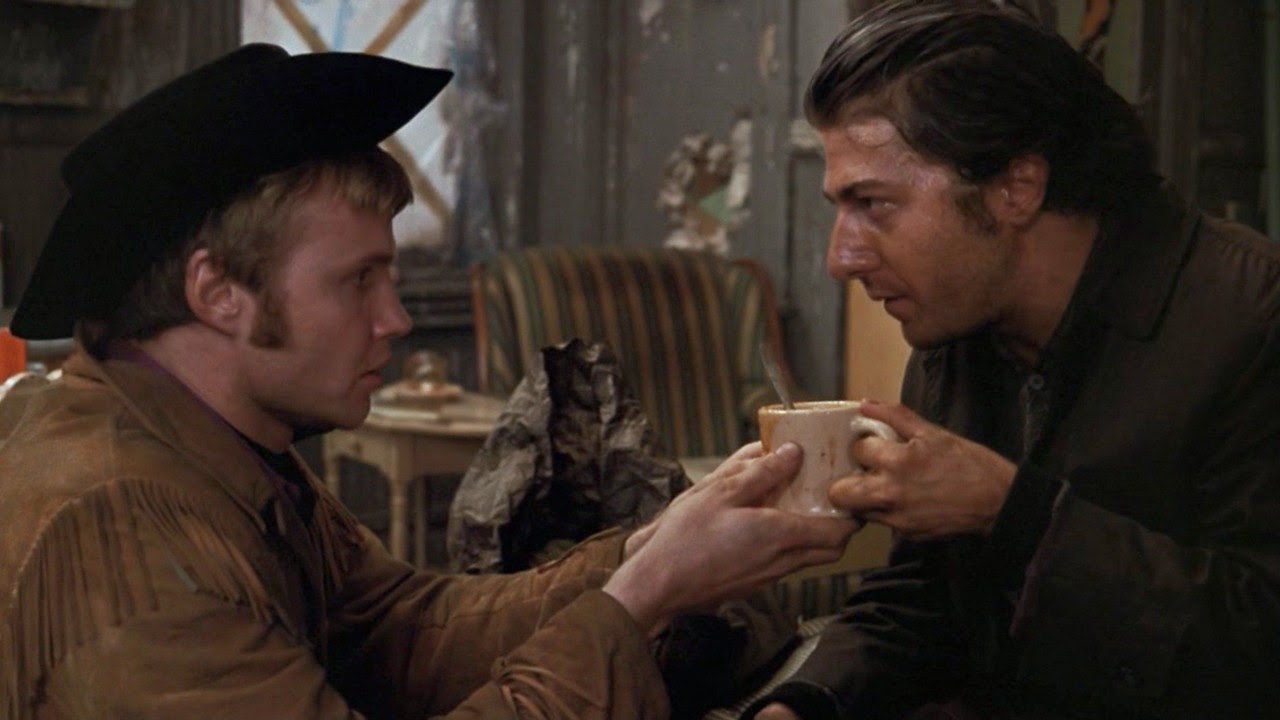 I have always remembered this line from Roger Ebert's review: "trying to get the good out of Midnight Cowboy is like looking at a great painting through six inches of Jell-O."  Will I ever say something that beautiful and truthful?  Besides when I say "cookie dough ice cream is delicious?"  I suppose I can have a crisis about talent at another time.  For now, let's talk about this suckfest, which is no doubt considered a masterpiece by many.

Jon Voight stars as Joe Buck, a Texan who hopes to use his cowboy image to become a successful prostitute in New York City.  Needless to say, he is not very good at it.  I say needless because I personally would not assume that any job based around Jon Voight's sexual prowess was going to end well.  Anyway, he ends up getting swindled by Ratso (played by Dustin Hoffman).  Ratso is a seriously ill character who is famous for saying "Hey, we're walking here!"  Really?  Why is that such a famous line?  I live in the city and hear people yell at cars all the time.  Where are their Academy Awards?  In any case, they become friends and a bromance ensues.

Man, I really hated this film.  The soundtrack got on my nerves; it felt very invasive and out of place.  It was as if the director was just shoving in songs so that he didn't actually have to convey any emotions in his scenes.  I found the story to be completely uninteresting.  I don't know if this was because of Voight's wooden acting style or the lack of action, but I was bored the entire time.  I will credit Hoffman with a great performance, but since I didn't really care about his character, that can only carry the film so far.  After seeing such great chemistry between Newman and Redford in Butch Cassidy and the Sundance Kid, I almost felt uncomfortable watching the Voight and Hoffman interact since there really didn't seem to be anything between them.

I wish I could have seen some of the masterpiece and not just the Jell-O but unfortunately, I couldn't.

The famous taxi scene was unscripted, according to Hoffman and Voight.

Dustin Hoffman kept pebbles in his shoe in order to keep his limp consistent.