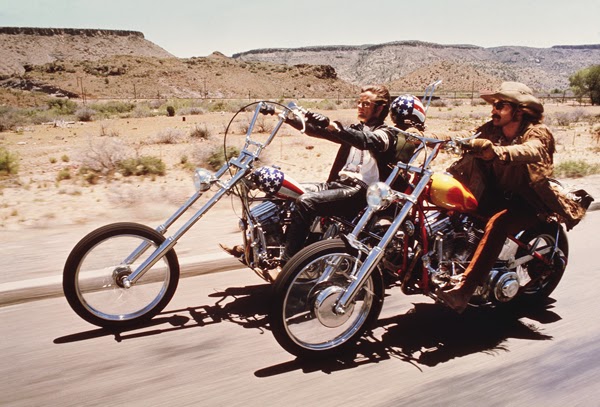 I will try not to get too sentimental here but WE HAVE REACHED 500!!  I hope my readers have enjoyed this journey as much as I have.  I have a blast writing these reviews and reading everybody's comments.  Here's to the next 500!

Unfortunately, we have to start second half on a somewhat sour note.  Dennis Hopper and Peter Fonda (the far less attractive son of Henry Fonda) decide to take a road trip to New Orleans for Mardi Gras, having just received a large sum of money from smuggling cocaine into the country.  Along the way, they pick up a small town lawyer (Jack Nicholson) and consume a lot of drugs.  American Dream is not what it is cracked up to be, etc.

Let's get my gripes out of the way quickly so we can finally get to a movie that I actually enjoy.  First of all, I am not a big fan of psychedelic adventures.  I have always hated Alice in Wonderland for this reason and I actually threw Fear and Loathing in Las Vegas across the room after reading it (I was feeling melodramatic that day).  I was completely bored throughout this film; however, if you enjoy that kind of stuff I imagine the film would be a lot more bearable.

To have actors stay in character while ingesting large amounts of drugs is a lot to ask.  I personally don't think it came across so well.  I was very aware that everyone was acting and that is coming from me, a sworn Nicholson worshipper.

A complete bore to sit through.  Please tell me a good movie is coming soon.

Dennis Hopper was in a state of constant paranoia during filming and would often yell at the crew.

The weird lighting effects that took place during the LSD scenes were caused by the film accidentally being exposed before development.