495. Butch Cassidy and the Sundance Kid 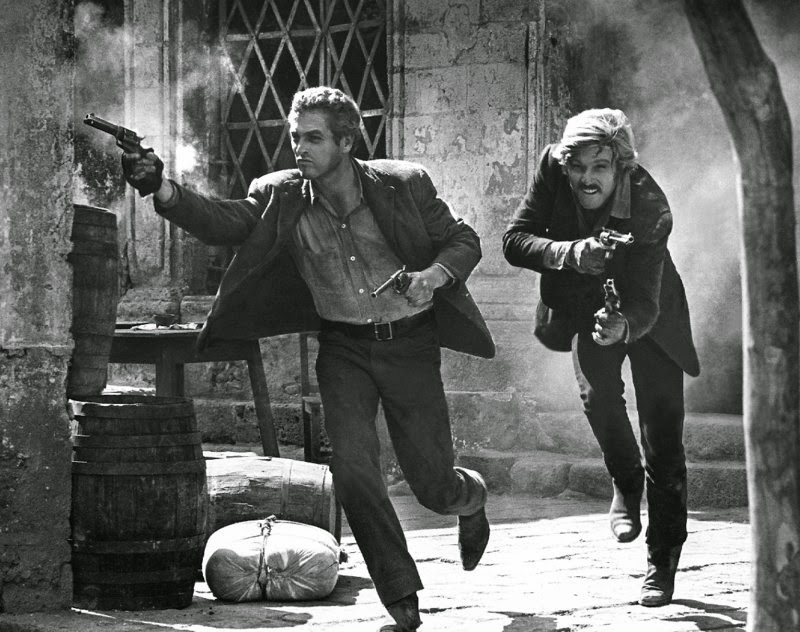 My mother has a slight obsession with all things Butch Cassidy, so I grew up watching this movie (although the part with Katharine Ross undressing was always fast forwarded).  Unfortunately, this obsession led to me being forced to read some pretty nauseating literature.  In any case, this is a movie I am quite familiar and would recommend to anyone interested in the western genre.

The film follows the adventures of Butch and Sundance as they attempt to elude a posse of lawmen after a robbery goes south.   Their escape takes them all the way to Bolivia, where, along with Sundance's girlfriend Etta Place, they become even bigger outlaws then they ever were in the States.

If the film was crap, the chemistry between Redford and Newman would redeem it completely.  Fortunately, the film isn't complete crap, though I do still have some complaints.

Did anyone else feel like the ending was kind of ripping off Bonnie and Clyde?  The last scene is not historically accurate so it is not like it is just a coincidence that the endings are similar.  I realize they weren't exactly the same but I couldn't help comparing the two and I have to say, Bonnie and Clyde came out on top.

Still, a very entertaining movie with absolutely fantastic acting although get ready for some loooong chase scenes.

Butch Cassidy's sister would often visit the set and was amazed at how accurate Paul Newman's portrayal of him was.

Katharine Ross was forbidden to be on set by George Roy Hill when she wasn't filming because she operated a camera.  Ass.