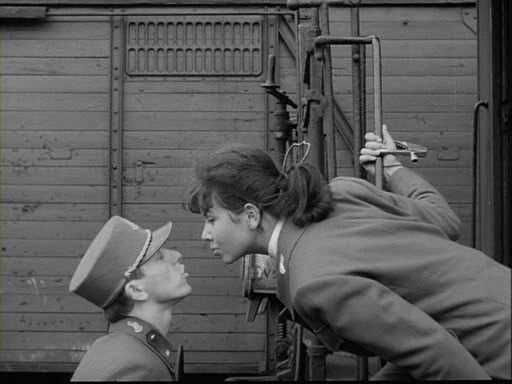 Today when I went to tick this one off my List, I was surprised to see I already had.  When did this happen?  I watched the entire film yesterday without having a single instance of deja vu.  I think I need to start doing memory exercises.

Milos is on his way to his first day of work as a station guard.  He briefly tells us about the history of his family (which includes a particularly unfortunate hypnotist).  He decided to become a station guard because he really just wanted to do nothing with his life but sit and watch other people work.  He has a crush on a pretty train conductor, but has some...um...trouble performing.  Does this sound like a Judd Apatow movie to you?  It did to me...well, at least until the Nazis showed up.

I knew going in that a comedy from 1967 Czechoslovakia wouldn't exactly have me doubled over laughing.  I was right on that score; I hardly even cracked a smile.  So on that level the filmed failed for me, although I realize that that is not really the filmmakers' fault.

However, if I view this film as a drama, I enjoyed it quite a bit.  The cinematography is absolutely beautiful and it managed to show the war in a way that didn't make caricatures out of anyone.  Milos was a fun character to watch, even though his actions seemed a bit contrived at times.

I will enjoy the memory of this film until it goes away, which will apparently only be a few weeks.

We got a horror film coming up next.  Yay!