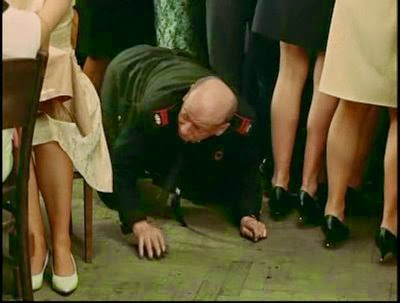 So here is yet another Czech film. I am not quite sure why Czech movies don't seem to exist in The Book outside of 1967, but that is a question for another time.  Amazingly, this time we are dealing with a Czech comedy.  I am saying this is amazing since all of the recent foreign movies have ranged from confusingly dry to downright depressing.  Let's see if this one can actually make me laugh.

I had tried to watch this film before but had a hard time finding it anywhere.  Now there seems to be an abundance of copies online, just none with English subtitles.  I was forced to download a transcript of the English subtitles and read along as the film progressed.  As you can imagine, this is not the ideal way to view a movie, particularly a comedy.  So although I did not crack a smile once throughout the duration of this film, I won't fault the movie for that and will blame the lack of humor on my horrible process of watching it. That's fair, right?

Anyway, this film takes place during the annual Firemen's Ball.  The laughs (I am guessing here) come from the fact that everything goes wrong during the event.  Most notably, people keep stealing raffle items and the beauty pageant is a complete disaster (honestly, sometimes I feel like watching the films in the 1001 Book is an exercise in restraint for feminists).

I can see why this film is significant since there are quite a few slams to communism that ultimately resulted in the movie being banned in Czechoslovakia.  Still, it was kind of a miss for me; I found it neither funny nor entertaining.

The cast was made up mostly of unprofessional actors.

One of Roger Ebert's Great Movies.
Posted by Amanda at 11:25 AM