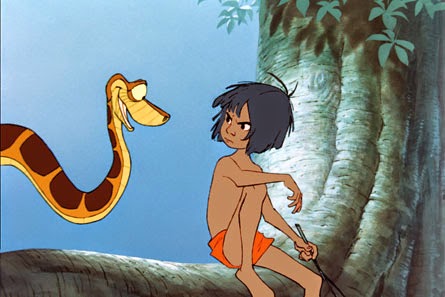 I grew up watching Disney films so I had, of course, seen this movie before.  However, this was never one of our favorites growing up (probably because it didn't have a princess) so I decided to check it out again.  I actually invited my sister to watch it with me too but she was not even a little interested.  I can't say I blame her; compared to what Disney would come out with in the future, this movie pales in comparison.

Bagheera the panther stumbles across a "man cub" abandoned in the woods.  He gives the baby to a family of wolves to raise. When it is discovered that Shere Khan, a tiger who hates men, is coming back to their part of the jungle, Bagheera tries to take the boy to a man village to be with his own kind. They meet a fair share of interesting characters along the way, my favorites being Kaa, a python who wants to eat the child, and Baloo, a bear with the best intentions.

So I know it is unfair to compare this film to other Disney movies that came out in the nineties, since animation progressed so much.  But I actually thought the animation was beautiful, while the storyline was just...meh.  Sometimes it felt like a series of vignettes about the jungle rather than a coherent storyline.  It is also suffered from Annoying Kid Syndrome when I start to root for the villain a bit since the kid is so obnoxious.

Don't get me wrong; overall, I liked it.  It was a lot sadder than I remember; I would be lying if I said I didn't well up a bit at the end.  You probably will cry too, unless you are made of stone.

Why are all evil animals in Disney British?  Ray, can you answer that?

Walt Disney died during the production of this film.  It is likely that if this movie had failed, the animation division of Disney would have been shut down.

The Vultures were based on The Beatles.

Best song in the film: