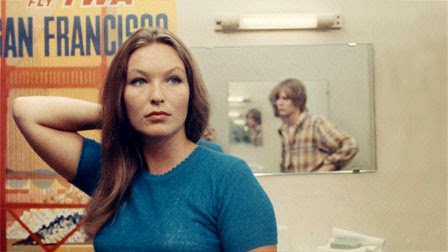 This is our seventh Godard film on The List and I feel as though as the years have progressed, Godard has cared less and less about plots and characters.  Instead, his films have simply become platforms where he can complain about society.  I enjoy subtle commentary, but this is getting a tad ridiculous.

The film is about (that might be too specific a term for this movie) Juliette Jeanson, a married mother who spends her days prostituting herself, seemingly to make ends meet.  Occasionally the characters will break the fourth wall and ramble about this and that directly to the camera.

I am liking Godard less and less.

Screenshot of Vivre Sa Vie can be seen on the wall.
Posted by Amanda at 1:50 PM