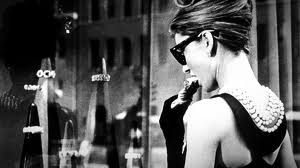 Earlier today I went skydiving and it has a been a bit difficult focusing on anything after jumping out of a airborne plane.  Anyway, I thought I would catch up on some reviews since I seem to be incapable of any other movement.

I have forced to watch this film many times in my life.  Usually, women in my life force me to watch it every once in awhile for reasons ranging from birthdays to getting stood up by crushes.  I really can't talk, though, because I am constantly forcing people I know to watch Buffy the Vampire Slayer.  This is certainly an iconic movie that everyone should see at some point.  Let's proceed to rip it apart.

First of all, I have never been a huge Audrey Hepburn fan.  In my opinion, she just doesn't have that great of a screen presence.  I think a lot of people adore her for her gentleness and style but compared to other actresses, she just isn't as talented.  That being said, the "Moon River" scene is enchanting.  But don't even get me started on the Mickey Rooney scenes.  Yikes.

I read Breakfast at Tiffany's in high school and I have to say, the book was much better.  I think Holly's character translated better on paper than on screen: I found her really annoying at times in the movie.

Wow, I was harsher than I meant to be.  Actually, it is not a terrible movie, but it will never be one that I watch again and again.  Oh wait, I already have.

Marilyn Monroe was originally going to play the lead role but her publicist thought that playing a prostitute would be bad for her image.

Get ready to fall in love: