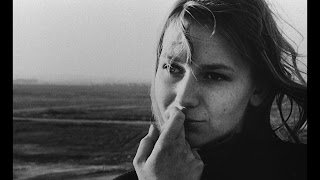 And I thought the last movie was weird.

All right, so maybe this one wasn't so much a film as a 28 minute powerpoint presentation that inspired 12 Monkeys.

Surprisingly, I will not rag on it too much.  Actually, it was a pretty enjoyable half hour and probably the most fun I have ever had with an experimental film before (although that bar is not particularly high).

This is a story of a man who is sent back in time after the apocalyptic Third World War.  He is forever haunted by a woman he saw on a pier as a boy.  There is romance, action, and a very cool twist.  It actually sounds like a pretty standard sci fi movie, except for the fact that almost the entire movie is told in camera stills.

If the film didn't have such a brilliant plot, I would think the format was pretentious and tedious.  However, the whole movie was quite beautiful and before you know it, you don't even notice the style.

A risky but excellent film.