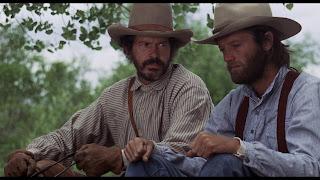 I recently went to a party (an outdoor, six feet apart party), where everybody was mixing up Henry Fonda and Peter Fonda. I kept my mouth shut, because I like to keep my annoying level to a 6 at parties, and I had already eaten most of the host's candy. But on my own blog I can be as annoying as I wish. They were thinking of Dennis Hopper anyway.

Harry and Arch have grown tired after wandering around the American Southwest for seven years. I doubt there was meant to be romantic subtext here, but I got the sense the men were in love with each other. What a shame it took until Brokeback Mountain for somebody to explore the possibility of a cowboy romance. It gets mighty lonely in them thar hills.

Moving on. Harry decides it's about time to return to that wife and daughter he abandoned. Truly a stand up fella. His wife Hannah agrees to take him back in, but only as a hired hand. This actually sounds like the set up to a romantic comedy more than a brooding Western, but unfortunately, no wacky hijinks ensue.

I like Westerns, but I thought this felt a bit silly. This wasn't a very dialogue heavy movie, and you could tell each line was meant to carry emotional weight that, unfortunately, the script couldn't quite carry. It was also filled with long "traveling on horseback" scenes, which made me feel like I was watching a video game load its next cut scene.

Of course, this was a low budget film, which is probably why it felt so amateurish at times, particularly at the end. It held my interest, but it wasn't an essential inclusion by any means.

Voted best film of the year by the magazine "Films and Filming" in 1971. Scuse? That was the year of Dirty Harry!
Posted by Amanda at 9:44 AM