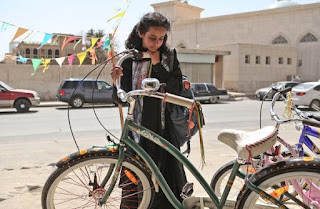 There sure are a lot of movies about kids coveting bicycles on this blog. This is the first movie directed by a woman from Saudi Arabia, but because Saudi Arabia is Gilead without the laughs, she wasn't even allowed to speak to her predominantly male crew and was forced to direct the street scenes from a nearby van. Yay, progress.

Wadjda really wants a bike so she can race against her friend (a neighborhood boy named Abdullah), but her mother refuses to buy it for her, because give young girls an inch and soon they'll want all sorts of terrible things, like human rights or the ability to vote. Meanwhile, Wadjda's grandmother is trying to find her son another wife, because Wadjda's mother hasn't borne any sons yet.

So this was obviously upsetting in numerous ways. But the characters themselves are so lovable that I found myself forgetting my anger and just rooting for these characters who were trying to improve their lives in small, but hugely significant ways.

A welcome perspective and a welcome entry on the List.