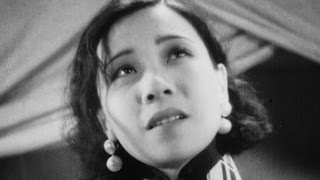 I feel like the foreign additions to the List have all been pretty good, the American additions not so much. This film is considered a highlight of China's cinematic golden age, and it's not difficult to see why.

The Goddess referred to in the title is an unnamed single mother, struggling to make ends meet for her young son. She works as a prostitute, and unfortunately attracts the attention of thug/pimp/hat-wearing bad guy who makes her his private slave. The Goddess is not only concerned with her child's safety, but also in protecting him from the shame of having a prostitute for a mother.

You don't really see a lot of subtle acting in silent movies, because the medium doesn't really allow it. Actors must go out of their way to drive the story with their often hammy performances, otherwise the audience would be all the way confused about the plot, instead of just mostly confused. But I was very impressed with Ruan Lingyu's performance, which hit the perfect level of intensity. She radiated happiness in scenes with her son, and her scenes of quiet devastation were moving. I can see why she was such a popular actress at the time.

So another good addition, but I might need some lighter movies soon.

The Chinese term Shennu is an old euphemism for prostitute.