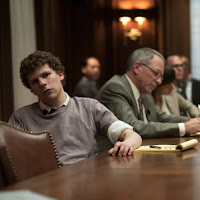 I think social media has made the world worse, even in our scary alone times right now where we might be tempted to draw a face on a volleyball. I actually don't have sports equipment in my house so I've had to improvise. Meet Broomie. Anyway, let's examine the Oppenheimer of our day, Mark Zuckerberg.

The movie begins with Mark getting dumped by his girlfriend. The movie portrays Mark as somebody who should have patented mansplaining, only he doesn't need the money. Apparently, this depiction isn't entirely accurate, but I think it's safe to assume that a billionaire genius is an asshole (no matter what Rashida Jones says!) and I have no problems with it.

So if the film isn't interested in historical accuracy, what's the purpose? I feel like we were promised more growth of Mark's character than we were given, and nearly every character was a dick, so you weren't exactly rooting for one outcome or another. Still, the movie finished strong and had an excellent score.

Certainly not the best biopic on the List, but is well-suited for your next gloomy mood.

Mark Zuckerberg has commented that they always got his clothing right.

Armie Hammer studied Jeremy Irons in Dead Ringers to get the portrayal of the twins correctly. I knew there was a reason I was creeped out.
Posted by Amanda at 8:49 AM