A Throw of Dice
1929
Directed by Franz Osten 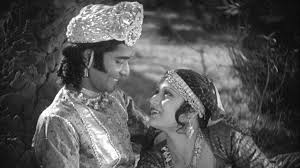 I associate early Indian movies with Satyajit Ray, who was determined to make his characters and viewers as miserable as possible. Luckily Franz Osten has a different goal, and for a movie that is nearly a century old, it wasn't so bad.

The beautiful Sunita attracts the attentions of two rival kings, Ranjit and Sohan. She prefers Ranjit, but who cares what she thinks? The kings play a craps game to decide who gets her.

This movie is certainly impressive in its scope, even if the story and characters were a bit silly. I was also impressed by the pacing, which was abetted by a short runtime.

I am sure silent Indian films from 1929 are probably not on top of anybody's quarantine binge list, but it is still worth a watch. But if you are rolling your eyes at me, know that I am consuming plenty of movie/television garbage as well. Love is Blind, anyone?

Includes the first kiss in an Indian movie.