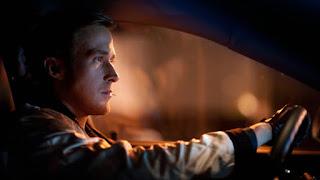 Continuing our theme this month of movies featuring brooding leading men, we come to Drive. I have never been into cars, and I must once again plead for your discretion when I tell you that; I don' want any men I date to learn about my ignorance and insist upon correcting it. Anyway, I was concerned by the title that I would be bored by prolonged chase scenes, but luckily that wasn't the case.

The main character is never named, which I think is worthy of an eye roll, but it's Ryan Gosling so I'm forgiving. He is a Hollywood stunt driver by day, getaway driver by night, laconic Adonis by all the time. He becomes attracted to his neighbor, Irene, and attached to her adorable son who rivals the kid from Jerry Maguire in terms of pure cuteness. He decides to protect them, by any means necessary.

I think this movie wanted to be a lot edgier than it was, so it overcompensated with gratuitous violence. That being said, there were many talented actors involved, so they manage to do a lot with very little. Also, another bitching soundtrack.

If only all our movies could involve moping hotties, and not, say Christian Bale in a wig.

The Driver only has 116 lines.

Albert Brooks was in character when he met Refn, and pinned him up against a wall.

Refn has failed his driver's test eight times.
Posted by Amanda at 6:52 PM