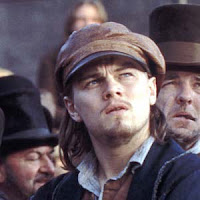 I thought we could use an antidote to the sickening sweetness of last week's musical. Of course, the grass isn't always greener on the other side, even if Leo is standing on it.

In the slum neighborhood of Five Points, Manhattan, two gangs fight over turf, unfortunately without any snapping or pirouettes. Priest Vallon, the leader of the Dead Rabbits gang is killed by Bill the Butcher Cutting. Vallon's young son swears revenge and returns to Five Points sixteen years later. You can probably guess what happens.

Daniel Day Lewis' performance has been praised, and even I'll admit he is brilliant in this, though I generally find him insufferable. But poor, poor Cameron Diaz. Bless her heart, she tried. Even Leo forgot that he was supposed to be doing an accent sometimes. At least they both looked hot panting.

Anyway, the plot is just okay, the sets are incredible and has a star studded cast. So by Hollywood standards, a wonderful movie. But by 1001 movie standards? They probably could have done without the Butcher's leavings.

Sarah Michelle Gellar was originally cast as Jenny, but had to back out due to scheduling conflicts with Buffy. Joss Whedon is once again responsible for my heartbreak.