The Eagle
1925
Directed by Clarence Brown 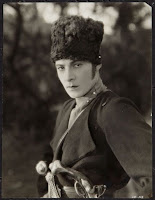 Even though the new editions of the List tend to favor newer movies, they did sprinkle in some entries among the older ranks. I guess they felt they didn't pay enough homage to Rudolph Valentino the first go around, so now we all have to sit through this one and properly acknowledge his hotness.

My embarrassing literary secret is that I've never read any Pushkin, but I believe this is based on a Pushkin novel. Valentino plays a Russian lieutenant who catches the fancy of the Czarina, but she's old, so gross. He rejects his advances and flees, so she puts out a warrant for his capture, dead or alive. Then he becomes Robin Hood.

It was jarring watching this, as I haven't watched a silent film since I was a young lass and started this blog. I know that back when I was languishing in the mire of Griffith movies, this would have been a welcome reprieve. But now it was rather a chore to sit through, because well...they hadn't starting making good movies yet. You know, with good stories and non awkward movie kisses.

Still, Valentino is a magnetic force. So he deserved a place on this List.

In order to project a more masculine image in this film, Valentino insisted on doing the opening stunt himself.
Posted by Amanda at 1:55 PM