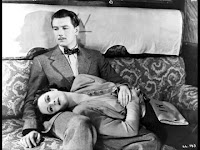 Happy October fellow movie buffs. I love to read horror fiction and watch horror movies at this time of the year. Right now I am reading The Master and Margarita (okay, I know not strictly a horror novel but it at least has the devil). I also realize that The Lady Vanishes hardly falls under that category either, but hey, we are just warming up here.

Also want to give a special birthday shout out to Ray, our British expert on all things movie related. Maybe this will be the year he outgrows Bergman!

Anyway, back to The Lady Vanishes. Iris Henderson is returning to England to marry her boring fiance.  She becomes temporarily stranded at an inn in Bandrika (a fictional country; don't embarrass yourself with a google search) after an avalanche blocks the rail line. She has a meet cute with a musician. I won't go into details but suffice to say she is outraged by his caddish behavior. The next morning Iris gets hit on the head, and befriends Miss Froy, who appears to be the quintessential British mother hen. They board a train and when Iris awakes after taking a short nap, Miss Froy is missing. Iris is sure that Miss Froy is real, but everybody else on the train denies her existence. Everybody except a certain mustachioed cad.

Apparently the Listmakers decided that having only eighteen Hitchcock movies was an affront of the highest order, so they added this one in too. I don't deny that Hitchcock is a versatile director, but I feel like his range has been fairly well highlighted already. This one doesn't contain any themes that haven't been well-covered already in arguably better movies of his, like 39 Steps or Spellbound.

That being said, of course I love Hitchcock, so this is a great movie. The pacing is excellent, the plot is full of exciting twists, and the chemistry between the two leads is palpable. Would recommend next time you are in the mood for that perfect old movie.

The set for this movie was only 90 feet long.

HITCHCOCK RADAR: Near the end of the movie, at Victoria Station
Posted by Amanda at 4:32 PM