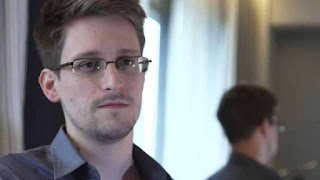 Am I the only one who is very attracted to Edward Snowden? No? Okay, let's get back to the dystopian nightmare that is the modern world!

This is a documentary on the Edward Snowden leaks which basically revealed that 1984 is real and maybe we should have all been nicer to that George guy when we had the chance. Most of the film takes place in Snowden's hotel room.

It's crazy watching history unfold on screen. It's amazing that we got to hear from Snowden firsthand as he explained his reasonings and fears. How many other historical traitors had that privilege? It makes me wonder if I would have been as attracted to Benedict Arnold. Based on his Google images, I am going to go ahead and say yes.

A chilling but important watch.

Poitras edited the film in Germany to avoid having the FBI seize her hard drives.

1.2 million people are on the watch lists of the US intelligence agencies.
Posted by Amanda at 12:29 PM