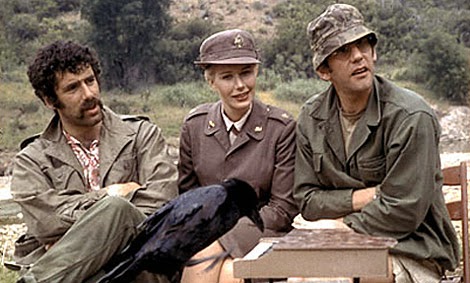 We go from Patton to this nasty piece of work and what a horrible transition it is.  I can't understand why anyone would find this film funny.  I found it to be completely upsetting and the fact that it got a television spin off is baffling to me.  Maybe we can make a sitcom based on Birth of a Nation next.

There isn't much of a plot here; it is more like a series of unpleasant vignettes that take place in a mobile hospital unit during the Korean War. The kind of systematic bullying, which borders on sexual assault, that Major Margaret Houlihan has to endure is upsetting in itself.  Although this pissed me off, it was not enough to make me hate the film.  After all, if you couldn't take watching people be mistreated in films, you would be stuck watching Fantasia on a loop.  What upset me the most is the intended audience reaction for this character.  We were supposed to cheer for the soldiers as they sexually humiliated this woman, supposedly because she represented the bureaucracy?  I don't really care why they said they did it; it clearly revealed this malevolence towards women that can't be explained away.  I don't want to reveal what happens to this character, but just know that the outcome drives me completely insane.

Some people may be able to look past this (or simply not care at all; which is unsettling in itself).  But I cannot and for that reason, it is one of the worst movies I have ever seen.

Donald Sutherland and Elliot Gould went to the studio in hopes of getting Robert Altman removed from the project.  You are all just terrible.

Much of the dialogue was improvised.