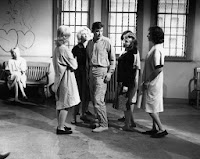 You would think that during the Thanksgiving holiday break I would have lots of time to watch movies but I have had so much work to do that I almost brought a hot flash on myself (and I am way too young for that).  However, I decided to take a break and watch this fun movie which was a very welcome break after watching so many "serious" movies.

Johnny Barett wants to simultaneously solve a murder at a mental hospital and win a Pulitzer prize.  To do this, he asks his stripper girlfriend to tell the police that she is his sister and that he has tried to rape her.  Lucky for him, they decide to send him to the asylum (he really rolled the dice on that one).   Among the inhabitants of the hospital including an extremely fat guy who sings opera right in your face while you are trying to sleep and a guy who thinks he is a soldier from the Civil War.

I had a lot of fun with this movie but let's start with the bad.  Every once awhile a character's thoughts would be shown.  Although I think this is a bit of a lazy technique, I have no problem with that device. However, the movie would switch to a character's thoughts in the middle of a conversation.  It was a little bit jolting and random.

Still, I love this movie.  I thought the story was extremely intriguing.  It would have been interesting enough watching a sane person go to a mental hospital, but we also get a great murder mystery.  It was also fascinating watching Barett's girlfriend deal with having to tell a police officer that her boyfriend is a sexually aggressive psychopath.

Another gem that I never would have discovered with The Book.

Referenced in The Dreamers and Naked Kiss.