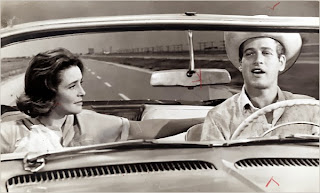 I came down with a bad case of laryngitis and have completely lost my voice (which no doubt pleases several people).  Anyway, I took to bed and decided that a little Paul Newman would a sight for sore eyes.  Or in my case, a sight for a sore throat.

Hud has had a terrible relationship with his father ever since his brother was killed in a car accident when Hud was driving.  Once Hud's father's, Homer's, cattle are struck with foot and mouth disease, Hud is back in both his father's and his nephew's life.  Oh yeah and then Hud tries to rape the maid but she forgives him because she would have had sex with him anyway!  Um, okay?

So I don't have too much to say about this film partly because my throat is on fire and I just want to go to sleep.  I really just didn't get the point of it.  Were we supposed to think that underneath Hud's rough, rapist exterior he was a good man?  Were we supposed to feel sorry for him that he drove away anyone who ever loved him?  Or were we supposed to sympathize with the other characters because no matter what they did, Hud was always the same hateful guy?  I don't really care about the answers to any of these questions, though, because I found the movie to be quite dull and the pacing way too slow.

So not a great film but Paul Newman, as always, was fantastic so it is worth a watch.

Newman played the character Hud like a villain but many people consider Hud to be a hero.

So that this post was a bit half assed.  How many more times can I use the sick excuse?