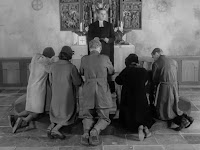 The entire northern United States (which unfortunately includes me) is suffering from a cold that possesses an unrelenting determination that could rival the Terminator's.  And now that it is Monday I get the added guilt that comes with staying home on a weekday.  Well, at least I get to watch a good movie, albeit one with a complete nightmare of a name.  Wait, it's a Bergman film? Oh crap.

Bergman is like the blowhard at that party who just won't shut up about religion and is completely indifferent to the fact that it is not his provocativeness that is making everyone around him uncomfortable, but the dullness of his diatribe.  So just tack on my Bergman is Boring mantra to everything I say from now on.

This is the story of a priest who loses his faith, which in turn, causes others to lose their faith.  Except in the case of Marta, who is already an atheist and is portrayed as a complete loon who won't get the hint that the priest is not interested.  I am no expert on men, but I am pretty sure if you are trying to attract one, you don't keep talking about the rash you have.  But hey, that is just my two cents.

I think your interpretation of this film is going to depend heavily on your own religious beliefs.  If you are Christian, and I do believe Bergman was, you are presumably going to feel sorry for this man that he longer has a god.  I am an atheist, but I can understand that a priest losing his religion would no doubt be tragic; after all, realizing that you have dedicated your life to something you no longer believe in would no doubt be terrible.  Most of the time, the movie allows you to form your own conclusions.  However, having someone blow their brains out because they no longer believe there is a god is a bit of a push toward the more conservative side of things.

The agonizingly long takes, the sentimental religious themes, and the fact that no one cracks a smile during the entire movie: it all so very Bergman.  And I am so very tired of it.