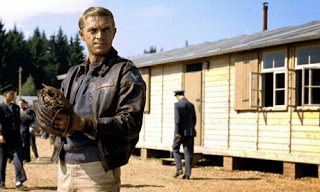 So I am now convinced that this cold is just a part of who I am and will almost certainly never go away.    At the very least, it has allowed me to watch a ton of movies.  And after a string of um, questionable films we finally get to one that I enjoyed.  Get ready for a rave, ladies and gentlemen.

This film is based on the true story of the escape of Allied prisoners from Stalag Luft III during World War II.  I actually remember someone doing a presentation on the accuracy of this movie in high school and making a mental note to watch it.  That was…never mind how many years ago but I finally got to it.  See, I didn't forget, Sean Miller aka the guy who had no idea I existed.

Most war films seem to all be the same, especially Vietnam films (I am so not looking forward to that era), so I tend to get bored with them quite easily.  This movie, however, completely blew away.  Going through the checklist, we get great actors, great dialogue, and great action.

It is the sworn duty of all Allied officers to constantly try to escape, over and over again, no matter how many times they are caught and punished.  This put a really interesting twist on the formulaic prison escape genre (I say that lovingly since I am obsessed with those movies).  The standard is switched; it is weird if you don't have numerous amounts of escape attempts to your name.

Every scene is done beautifully and it is all the more fascinating since it is based on a true story.  A must see.

Steve McQueen performed most of his own stunts.