Apur Sansar
The World of Apu
1959
Directed by Satyajit Ray 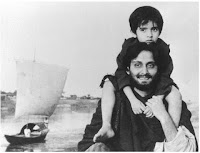 So we are finally done with the Apu trilogy.  In hindsight, I probably should have watched all of them in one sitting.  Regardless, I am done and while it will be hard to limit my review to this one installment, I will do my best.

Apu is all grown up now and he is attempting to be a successful writer.  He gets married as a good deed after the initial groom is proven to have a mental disorder.  Good on Apu for continuing to enslave his cousin.  Anyway, they have a kid and because the film is part of this trilogy, death and despair are inevitable.

I am going to sound like a broken record here but I have the exact same things to say about this installment as I did the other ones.  The scenery is beautiful, the acting is average to quite good, and the cinematography is excellent.  However, I still thought the movie dragged sometimes and because it is so relentlessly depressing, it will never be a favorite.

The Book notes that the romance between Apu and Aparna is very sweet.  I, on the other hand, felt that their courtship was more creepy than beautiful.  I just felt sorry for Aparna that she was involuntarily married off to her poor cousin.

So I am glad to put this trilogy behind me and I will probably never watch it again. Still, it is recommended, along with tissues and ice cream.

Sharmila Tagore was only fourteen when she made this film.

In 2005, Time listed this as one of the greatest films of all time.

A fan made trailer: