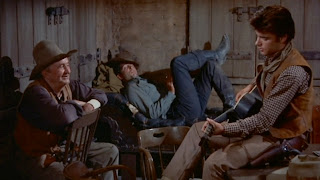 The one remarkable thing about this movie is that we get a great song by Dean Martin.  Other than that, this movie kind of represents a dying breed of film.  John Wayne beats the baddies (usually Native Americans) and every thing works out for the good guy.  Of course, in the fifties there have been notable exceptions in the western genre.  Still, I feel like this was a bit of a swan song.

Like I said, John Wayne is fighting the bad guys once more in Rio Bravo.  This time, however, we get some great characters who are a lot more interesting than your average western guy.  It is quite obvious throughout the film that this is a Hawks movie, so the focus is on great dialogue and character development rather than scenery and shoot outs.

So overall not a great western but hearing Dean Martin and Ricky Nelson sing is always a treat.

Only two close ups in the entire movie.