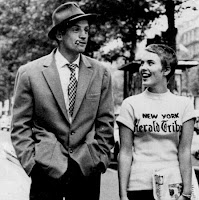 We have been on a streak of films lately that I have not been particularly excited about.  Unfortunately, that streak did not end here because Breathless failed to entertain me in the slightest.

Let me start by saying I tried really hard to like this film.  I had heard so many good things about it that I almost felt as if it was my obligation to enjoy the movie, sort like how I felt when I saw The Godfather for the first time.  Ultimately, however, I failed in liking this film and once again, I cannot be the cultural snob that I aspire to be.

First of all, the main characters are super annoying.  The man is petty criminal turned murderer who is basically obsessed with money and sex (insert joke about how that applies to all men).  The woman is a slightly crazy hypocrite who enjoys feeling misunderstood.  Together, they make quite a pair!

This film has been lauded for its dialogue, but frankly, I wasn't too impressed.  Actually, I was a bit creeped out by some of the things that the man said, like that he would strangle her if she didn't smile.  I have been told I don't smile enough but I have never received any death threats about it.  And for that, I am thankful.

This movie is also acclaimed for its innovative use of jump cuts.  So…I guess thanks for that, Godard?

Overall, just a film that I could not enjoy and I can only hope I won't receive comments about how ignorant I am.

Godard could not afford a dolly so he pushed his cinematographer around in a wheelchair.

Godard had to shorten the film but was reluctant to cut out any scenes.  Instead, he trimmed scenes here and there, the result being the jump cuts we see.  So, it was a lucky accident?  I take back my thank you.