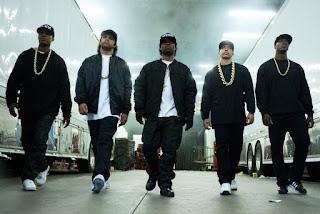 I just listened to Straight Outta Compton on my album blog (which was the close of the 80s, thank Nayru). Even though I didn't take to that album much (shock), it felt only right to then view the movie, with the album fresh in my mind.

Basically, the movie tells the story of the meteoric rise and fall of gangsta rap group N.W.A. There's infighting, shady managers, and rampant homophobia/anti semitism/sexism. I wish the latter had been addressed more in the film. I am not saying the entire movie had to be devoted to N.W.A's misogyny, but some elaboration of these views would have been welcome. Like, what did the women in their lives think about their music? I found the "Bye Felicia" scene particularly disturbing. I guess it was supposed to be funny.

Hey, I get it, or at least, am trying to get it. This thug persona is armor they wear to cope with the cruel realities of life in Compton. They are reporting the world as they see it, but I'm not entirely sure what their call to action is. I think they are too angry to have one. That being said, the police brutality scenes remain disturbingly relevant.

Still, the acting was great and the performances were, for me, the highlight of the film. Also, Paul Giamatti is always welcome on this blog.

The actors rerecorded the entire Straight Outta Compton album to help get into character.

Eazy-E's son auditioned for the role of his father, but didn't get it.

NWA were inducted into the Rock and Roll Hall of Fame after the release of this movie.
Posted by Amanda at 6:48 AM