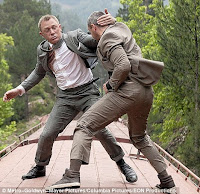 I have seen every Bond movie and read every Bond book.  It's an obsession that is a bit hard to justify sometimes, like my fascination with Real Housewives or slasher films.  Anyway, as much as I like watching a shirtless Daniel Craig, I feel that the best of the franchise is behind us.

James Bond and Eve Moneypenny (finally, this woman has a role beyond lusting after Bond) are tracking down a mercenary who has stolen a hard drive containing information on all of MI6's undercover agents.  The mission goes horribly wrong, mostly because of Moneypenny (you should have stayed in the kitchen, you skirt!).  Anyway, explosions, beautiful women, and casinos.  That about sums it up.

Let's start with the good.  The song is fantastic, obviously, as Adele is a goddess.  The performances were all extremely effective, particular Craig's, as he brings a quiet kind of sadness to the role that no actor has before.  Still, this franchise is getting more and more generic.  We have a few obligatory scenes that remind us we are watching a Bond movie.  But most of the time, I felt like I was watching a run of the mill action film.  I half expected to see Tom Cruise sprinting in the background.

I am not sure I can this is the franchise's fault.  After all, directors have been ripping off Bond films for decades, so the lines were destined to blur between the original and the copies eventually.  I suppose audiences are getting smarter as well; we are no longer content watching villains try to enact grand schemes in ridiculously convoluted ways.  Unfortunately, that was half the fun for me.

Anyway, if you like action movies, you'll probably enjoy this.  But I tend to find the genre a bit dull, so I will go with three stars.

Second longest Bond film of all time (after Casino Royale).

First Bond film to list the actresses as "Bond Women" rather than "Bond Girls."  Well, that took an appropriate amount of time.