The Descendants
2011
Directed by Alexander Payne 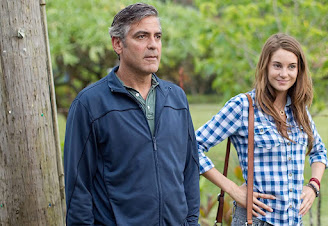 A couple of weeks ago I watched Gravity, and since then, I have had a George Clooney shaped hole in my heart. I was hoping The Descendants would fill that void.
Matt King is the sole trustee of a family trust of 25,000 acres of land on Kauai. Matt is being pressured by his cousins to sell the land, thereby making the rest of the family rich, but Matt has other concerns on his mind. His wife was recently in a boating accident, leaving her comatose. Matt is utterly clueless about how to raise his two daughters alone, both of whom have a serious case of sassmouth. It soon becomes clear that Matt didn't know his wife as well as he thought.
I am a big fan of Alexander Payne. His films have such compelling characters that it is a pleasure just to watch them interact together, even when the plot isn't moving forward. Naturally, given the setting of Hawaii, this was a beautiful movie. Matt King speaks about other Americans' perceptions of Hawaii as a sort of mythical paradise where everybody just surfs, and it's true. It's hard to imagine being truly miserable there.
Hollywood once again squanders the opportunity to cast people of color, even when the story would really allow for it. But that's the extent of the griping I'll do over casting Clooney, because he is dreamy. I also found the voiceover somewhat unnecessary; it seems like a case of telling, not showing.
It was still a satisfying movie and Payne always manages to warm my icy heart.
RATING: ****-
Interesting Facts:
Kristen Stewart and Amanda Seyfried both auditioned for the role of Alexandra.
Robin Williams was considered for the role of Matt King. Bullet successfully dodged.
Posted by Amanda at 10:08 AM