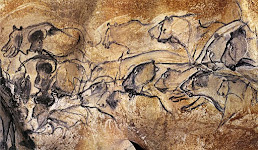 Cave of Forgotten Dreams has to be one of the most eye roll worthy titles on the List. Even Plato had less fussy nomenclature. Of course, I tease out of love and because I gather Werner Herzog really has a sense of humor about his work. Well, the former was true anyway.

This is a documentary about the Chauvet Cave, which contains some of the oldest human paintings that have ever been discovered. It really is fascinating hearing the experts weigh in, and it's absolutely incredible to see what has been preserved over thousands and thousands of years. I loved learning about the little artistic flourishes early human beings were capable of, like giving the bison eight legs to give the appearance of movement. Because it was Herzog, the scope naturally had to be huge, and I enjoyed pondering some of the deeper questions he asked us to consider, like when the human soul began and what albino crocodiles would think of the paintings (they'd like them, I guess?).

This really felt like something that could be a part of a museum exhibit, like one of those films that plays on repeat in a dark, air-conditioned room off to the side. Remember when we could go to museums? Ugh, me either.

Herzog was only allowed to have three other people with him in the cave, and they could only stay in for a few hours at time due to the high carbon dioxide levels.

At the time of filming, Herzog had only seen one other 3D movie (Avatar). He said he has no plans to ever film in 3D again.