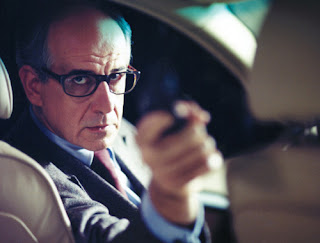 We continue our celebration of romance in all its grotesque forms with The Consequences of Love. It is a bit of a stretch to call this a romance film, but based on the title, it seems to be blaming all the main character's problems on love. Thematically, this works for Valentine's Day, a much favored outlet for misblame and self-loathing.

Titta Di Girolamo has spent the last eight years living in a hotel. I liked this character, he was well-cast as somebody that most people wouldn't look twice at. He's a loner but not with any incel-y bitterness, just the sadness of somebody accustomed to viewing things from the outside. He has feelings for a waitress, Sofia, but doesn't act on them. He, of course, has secrets.

I couldn't look away from the last scene, in fact, most of the movie was visually fascinating. I was pretty uneasy throughout this film but can't quite put my finger on why. This will never be a favorite of mine, as I felt it wasn't wholly accessible from a story perspective, but still an enjoyable watch.

I am not exactly sure what this movie was trying to say, but at least it said it with style. And much, much better than our last flick.

First film to bring widespread acclaim to Paolo Sorrentino.
Posted by Amanda at 6:45 AM