The Favourite
2018
Directed by Yorgos Lanthimos 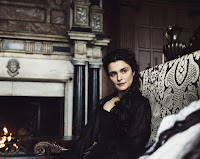 One of my favorite days I spent in England (and that's coming from a very long list) was when my brother and I visited Hampton Court Palace. On the train ride there we got Bakewell tarts. Come to think of it, that might be the main reason it was my favorite memory. Why don't we have them here in the U.S.? It's a well-documented fact that we love cramming our bodies with butter and sugar. Anyway, here is a picture of the two of us from that day, proving our good looks are, indeed, genetic: 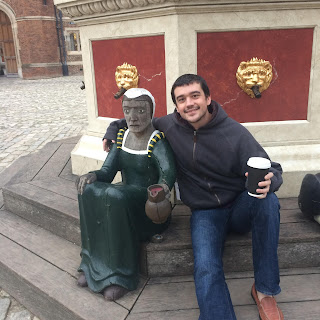 Now back to The Favourite!

In 1704 England, Queen Anne is in very poor health and relies on her Favourite Sarah Churchill for counsel and sexy times. Sarah's cousin, Abigail, arrives at the palace looking for employment, and Sarah lets her be scullery maid. Abigail, however, plots to rise in the ranks, as she is being courted (sort of?) by Mr. Taylor Swift (otherwise known as Joe Alwyn).

There is a very large market for sexy royal court dramas, both in television and film, but also in literature. It's really been my thing, I feel like the story always hits the same beats, and a large amount of the enjoyment comes from seeing the hot people naked.

That being said, I really enjoyed this. I liked the style and the black humor of it. I never felt like the director was taking it too far to "put his stamp on things" at the expense of the story or general mood. It was silly in places (there hasn't been such an odd dance scene since Romy and Michelle) but took itself seriously when it needed to do so. Some of the lines of this movie really reverberated with me; whether that is because of the words or the actors' deliveries, I'm not sure.

So another great movie and, once again, Emma Stone is delightful.

There was a dedicated trailer for wigs.

Film passes the "Reverse-Bechdel" test by one line.
Posted by Amanda at 3:04 PM