Precious: Base on Nol by Saf (Based on the Novel 'Push' by Sapphire)
2009
Directed by Lee Daniels 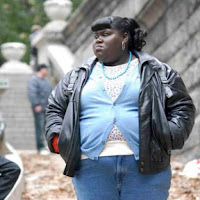 I have previously expressed in this blog an all consuming disinterest in watching this film, as it seemed like a somewhat manipulative tour of human misery. However, I saw this was available on Amazon Prime, and since me completing this List is an inevitable as the Patriots winning the Superbowl, I decided to take advantage of when I could get this for free. That last comment was an attempt to connect with the heavy male audience I know I have accrued on here.

Precious is a dangerously overweight teenager who is pregnant with her second child. After being kicked out of her school for her pregnancy, she attends an alternative school and bonds with the women she meets there. This movie includes incest, rape, AIDs, developmental disabilities, illiteracy, verbal and physical abuse, and poverty. If they had included starvation I could have completely filled out my misery bingo card, but that is obviously...ahem...not the issue being faced here.

At the time of the release, Oprah was shoving this down all our throats and even she admitted this is not a film to be enjoyed, but to be appreciated. There is no denying that the performances are incredible. I suppose the point is to tell a story about a person who is largely ignored by Americans, that illiteracy is still a huge problem in the United States, and that our welfare and education systems are broken. But after serving up heaping after heaping of tragedies, I think this message gets bit buried, and you're left wondering why you're subjecting yourself to this story in the first place.

Still, I did enjoy Precious' fantasy sequences and like I said, the acting is phenomenal.

Taraji P. Henson wanted to play of the role of Precious, but Lee Daniels turned her down. Oh, honey. Just no.

First Best Picture nominee to be directed by an African American filmmaker.

Over 400 women auditioned for the role of Precious.
Posted by Amanda at 8:20 AM